The Napoleonic Wars were long over.  The 1830 Revolution in France was done and dusted.  It was time for young Queen Victoria to visit the former enemy land.  It’s always good to be on congenial terms with your neighbours.  Early September 1843 was to mark the first visit of a reigning British monarch to France for over 300 years.  Louis-Philippe, King of the French, was at great pains to ensure that his guest would lack for nothing.  How did he go about ensuring comfort fit for a queen? 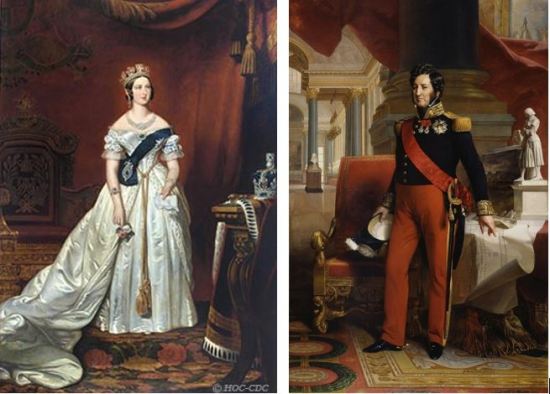 Louis-Philippe’s country château at Eu was, of course, far too small to accommodate Victoria and her retinue.  After all, it had only 150 bedrooms with space for just another 200 beds.  Help was at hand in the shape of Mr Packham, former Sussex resident and tenant on the king’s country estate at Eu.  First problem, find enought beds :

That solved the bedroom crisis.

Mr Packham had perhaps an even more important commission from King Louis-Philippe.  The king had found out that Her Royal Britannic Majesty was partial to a bit of cheese.  Not French cheese, of course.  It had to be English.  And who better to fetch cheese from Brighton than Captain Cheesman.  That was not all he was asked to import into France for the royal visitor.

Mr Packham accordingly dispatched an agent by the General Steam Navigation Company’s packet the Dart, (Capt. Cheesman) which arrived in Brighton on Tuesday morning.  He has since made a selection from the extensive stock of Bass and Son, merchants, of Brighton and the recherché articles were yesterday sent aboard the Dart. Bottled stout and bottled ale of various kinds have also been sent on board in large quantities from Gibarb’s Royal Pier Hotel.

The orders for all these articles are in the hand-writing and bearing the sign manual of Louis Philippe himself, and numerous packages, nearly 40 in number, are directed “Service du Roi, Mons. Du Caquoi, Controleur de la bouche, Palais d’Eu.  The Dart sailed yesterday (Wednesday) afternoon, at five o’clock from the Chain Pier.

So, the queen was not going to be satisfied with French wine either.  For her, it had to be ‘bottled stout’ as was also reported by the Journal des débats the following day:

[Mr Cote was commissioned by Mr Packham to purchase six different types of cheese from Messrs Basset, and to satisfy the wishes of the king, he bought the biggest cheese he could find.  This cheese was as big as a wagon wheel; Mr Gilburd supplied the bottled stout.  The stout and the cheese have been loaded onto the Dart bound for Dieppe.  Yesterday at five in the evening the Dart set sail with the provisions.]

The visit (see Geri Walton’s very detailed blog) was a huge success When the English royal party left Le Tréport, escorted by the king’s son, the duc de Joinville, they were given a rousing and enthusiastic send off.  On this side of the Channel, some six hours later, the people of Brighton were not to be outdone.  They were out in force to greet their monarch.

How rare to see the Royal Yacht flying the Tricolour – especially against a background of the houses of Kemp Town and the Chain Pier:

(the royal party has) met with a reception so warm and so cordial, that even the enthusiastic applause of our gallant neighbours was well-nigh outdone … In the meantime, the directors of the chain pier had the whole of the steps and passages from the pier head down to the eastern landing place carefully carpeted with crimson baize.

The Queen then spent a few days at the Brighton ‘Palace’ with her children (three little ones, all under the age of two) having made a valuable contribution to Anglo-French relations in just a few days.  Thank you, Ma’am.

Footnote: The French newspaper might have been exaggerating about the size of the cheese and might also have mistaken the name of supplier of that cheese which was was most likely Bass & Co., tea dealers, grocers, cheesemongers, &c of 2 Bartholomews.  However, they did get one fact correct.  The owner of the Royal Pier Hotel at 10 Marine Parade was William Gilburd and not Mr Gibarb.

One thought on “The Queen’s favourite tipple”