When you have been out and about in central Brighton, you might have seen this fascinating French vehicle.

These little vehicles are Tardis-like and are hard workers.  The Citroën H-series van was originally intended as the workhorses of French farmers and more generally in French villages right up until they went out of production in 1981 … and well beyond.  A careful piece of astute bodywork and interior fitting and hey-presto!  Two mobile crêperies.

Arnold explains how it all started:

“The French Revolution came about through friends we made through ‘A Lot of Gaul’, [see French Brighton blog of January 2017] the French shop that Judy helped run with Ray Ager: on a visit to Brittany, where we were invited to make a galette at a party.  Luckily, the father of a customer from ‘A Lot of Gaul’ ran an equipment wholesale company in France. How else would you find out where to buy a crepière (aka “burner”) in 1999? Well, we were being pointed in the right direction, anyway. We had some great parties at home, and when we could feed our children no more galettes, we took to the road – and how great was that first day, organised in haste, when we took a trestle table to a slow food event, coped with the massive queue, and sold out.”

And just look at what UUI (serving out of the side) and LUI (serving from the back) can offer when they open up to their hungry and thirsty public: 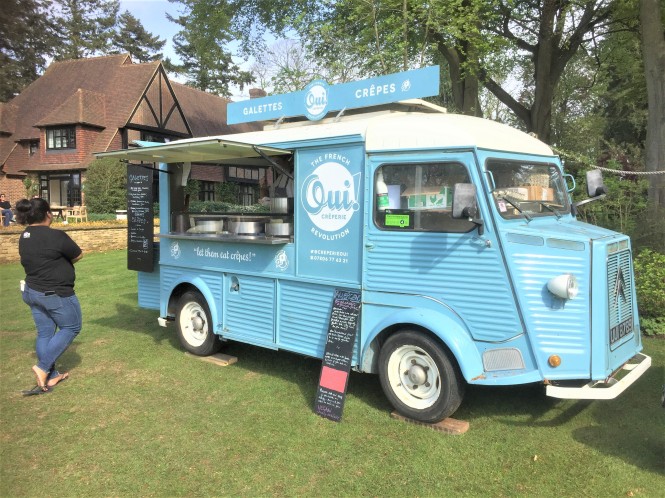 To find LUI and UUI this autumn, your best bet is to go to one of the University of Brighton campuses (Falmer or Moulsecoomb) on a weekday or on Wednesdays and Thursdays you will find LUI outside the NatWest office block at 153 Preston Road.

And here’s the French lesson, courtesy of Arnold:

GALETTE:  a savoury buckwheat wrap, and gluten free. Made usually with eggs and water. Traditionally, in Brittany where they originated, the batter was made without eggs, and the mix was left overnight to slightly sour, which acted as a replacement for the eggs. Buckwheat is an unusual ingredient, which has a gloopiness (technical term) about it that makes it easy to dispense with the eggs if needed, without any other additions.

CRÊPE: a wrap made with wheat flour, with eggs and milk.

Many thanks to Arnold Rose for all the information.  Find out more about Crêperie Oui at http://ouicreperie.co.uk/