Prince Charles Maurice de Talleyrand-Périgord stayed at 9 Old Stein in 1831.  True.  But for how long?  Was this information any more than a piece of nineteenth century PR by a lodging-house keeper?

In 1792, Talleyrand left France during the Terror which had followed the early days of the French Revolution – whether as exile or secret envoy is a matter of debate.  Travelling via Dover and settling in London, he did not visit Brighton.   Indeed, it would seem that Talleyrand always chose to arrive via Dover.  The fact that he never chose the shorter route from Paris via Dieppe and Brighton, but which involved a longer sea journey, argues for a theory that he was a very bad sailor. 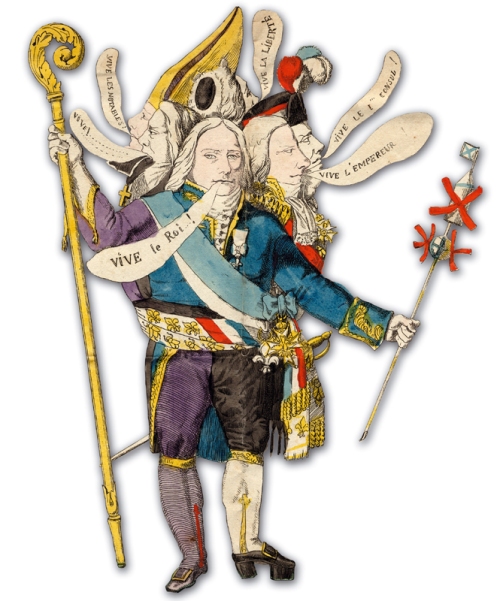 Talleyrand was a man of many loyalties.  He first swore allegiance to the Roman Catholic Church (he was ordained Bishop of Autun in January 1789 and technically remained so throughout his life). Following his commitment to the Revolution, in 1804 he became Grand Chamberlain to Emperor Napoleon, before serving first King Louis XVIII and then the despotic King Charles X.   Talleyrand finally became Ambassador to Great Britain in September 1830, representing the democratic King Louis-Philippe.

The Court of St James, in the guise of William IV, was often at the Royal Pavilion.  By January 1831, Talleyrand was in Brighton. The report below paints a more sympathetic picture of him that that shown by the caricature above:

“Prince Talleyrand, accompanied by the Duc de Valencez arrived at the Albion Hotel, Brighton, last Thursday …  The Prince is a true specimen of the ancient French noblesse; his deportment is dignified, and the fine curls of his wig flowing over his shoulders give him a venerable appearance.  From the weight of years [Talleyrand was 76 years old], he is very feeble; and he seemed to be very sensitive to cold, as he wore at least two great coats, and a roquelaure besides; he supported himself on the arm of his Secretary.  On entering his carriage, the Prince was driven to Mrs Fitzherbert’s, where he left his card and then proceeded on his ride.”
Evening Gazette Saturday 15 January 1831

[Both the wig and the knee-length coat (the roquelaure) had been fashionable in the previous century.  Talleyrand was no fashion victim although he was always smartly attired.]

So, in January 1831, the Prince had chosen the Albion Hotel as a good choice of accommodation.  On Saturday 15th January, he dined at the Royal Pavilion.  The next day, he wrote to the French Foreign Minister, General Sebastiani:

[Dear Count,
I have returned from Brighton much earlier than necessary to attend the Conference …  The simple life being lead in Brighton must convince us the sentiments which are expressed there are sincere.]

Brighton had not been unknown to Talleyrand.  In June he wrote to his illegitimate son, Charles de Flahaut:

[Dear Charles, if you go to Brighton, please bring me two English brushes, and six boxes of Anderson pills.  The brushes must have long handles so that I can friction my body morning and evening as prescribed by Mr Bretonneau.]

Talleyrand needed to look after his health, not only because of his age, but it is possible that his deformed foot (seen in the caricature above) caused him problems.  Despite spending much time at at a spa town in France, Talleyrand does not appear to have taken advantage of the shampooing facilities offered by Brighton.  Astonishingly, the 66 year-old King William is reported as having made the return journey from Brighton to St James’s Palace within a day.  When Talleyrand achieved the same feat in December 1832, the newspapers were suitably impressed:

“Prince Talleyrand. – It is curious that the sudden visit of the venerable diplomatist to Brighton, and his lengthened audience of [sic] the king, upwards of a week ago, have not been announced even in the Court Circular.  The Prince made the journey to Brighton, and back again to town (after refreshing himself with a warm bath), in one day.  No light feat for a man of his advanced age – and no trifling business, we may be sure, that called for such an exertion.”
Sussex Advertiser

Which baths did he patronise:  Wood’s, Mahomed’s, The Royal, The Artillery or Edward Henry Stammer’s shampoing, medicated and vapour baths?

His Excellency the Ambassador seemed doomed to visit Brighton in the worst of weathers.  He is reported as staying at 9 Old Steine (now the business premises of solicitors, Healys) in 1831 and only that once.  Thereafter he preferred the Albion Hotel. 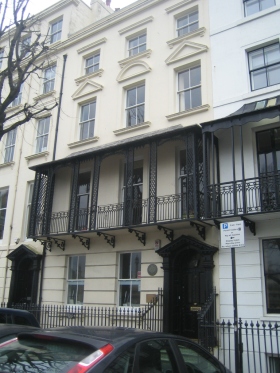 “Prince Talleyrand and the Duchess  de Dino [Talleyrand’s niece and long term companion]  arrived at the Albion Hotel about five o’clock on Sunday afternoon and immediately afterwards left their names at the Palace.  They were to have taken their departure on Tuesday, but, having been honoured with an invitation to the party at the Palace that evening, they deferred their departure till yesterday.”
Brighton Gazette Thursday 17th January 1833

In early January 1834, Talleyrand, accompanied by the Duchess de Dino, was again dining at the Royal Pavilion and staying at the Albion Hotel.

The following month, he celebrated his 80th birthday. He left England for the final time (again via Dover) at the end of August 1834, but left an enduring presence:  his reputation as a diplomat and his wax effigy in the exhibition displayed in the Bazaar run by Madame Tussaud and Sons.

After spending most of his retirement in the chateau of Valençay, Talleyrand died in Paris on 17 May 1838.

The plaque commemorating Prince Talleyrand’s stay bears the device of the Borough of Brighton.  It therefore predates the unitary authority of Brighton and Hove.  But just how old is the plaque?  And was the Borough Council aware of how brief a time His Excellency had spent in that house?