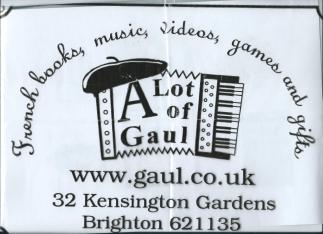 A wonderful pun for a wonderful small shop, alas now no longer in existence.  Ray Ager, co-owner, recounts the genesis of the shop

I’ve always been something of a Francophile, with a particular liking for the French language. I don’t really know where this came from – I know some believe in past lives – but my theory is that it was the result of listening to the French songs that were played on the radio when I was youngster: Sacha Distel, Yves Montand, Charles Trenet, Françoise Hardy, etc, plus the English singers who also sang in French, Petula Clark, Jane Birkin. I also remember it was the time of the classic film, Gigi, with Maurice Chevalier and his wonderful accent.

At school, unlike a lot of my classmates, I really liked the French lessons, which, even if I wasn’t a brilliant pupil, at least gave me a good grounding in the French language. In those days, the emphasis was still firmly on grammar, rather than the more modern conversational approach and I think this was a big help to me. Even though my French still isn’t fluent – I’ve been living in France since 2012 –  the locals tell me that they are impressed because I make very few grammatical mistakes (I hope that’s right in English!).

I’ve also always been something of a bookworm. I think I have my parents to thank for that – they always encouraged me to make weekly visits to the local library and encouraged me to read. I’ve never lost the habit and became quite a collector – perhaps hoarder is a better description! More as an adult, I also developed an interest in listening to music and also became an avid collector, initially vinyl and later CDs. I was a particular fan of the guitar, especially the slide guitar but also bought pretty much any French music I came across.

I lived in Brighton for over 30 plus years before finally moving to France. I loved the North Laine with the multitude of second-hand book and music shops. Most of my Saturdays were spent searching out new items in the North Laine and the numerous Brighton charity shops.

I also became a regular member of the Cercle Français, the Brighton and Hove French Circle, which was an excellent place to listen to French speakers and to practice speaking. If I found a French book, I would usually snap it up but there weren’t that many and from time to time, would make trips to the French bookshop in South Kensington, especially for newer titles.

I gradually built up such a collection of books, CDs and DVDs, that visitors to my house would tell me, ‘’You should open your own shop!’’. And I think the seed was planted… At the time I was working in computing for BT in Brighton. The company was downsizing and offering voluntary redundancy packages. I was walking home one evening after work along the seafront, mulling things over in the my mind. I was thinking about what people were telling me, ‘’Why don’t you open your own shop?’’ But the North Laine was already full of well-established second-hand books, records and DVD shops. I didn’t think there was room for another one of the same but I suddenly had a brainwave, ‘’Why not open a shop with a French theme – no more trips to London for books!’’

I started sounding out friends and acquaintances about the idea, particularly members of the French Circle, asking them where they bought their books, how many they bought and would they support a local shop? Feedback was very encouraging and I finally bit the bullet, took advantage of a redundancy package which gave me the necessary capital to get a shop off the ground and invest in initial stock. Thus was born A Lot of Gaul.