We all love looking down on a tiny town model (plan relief).  This is nothing new. 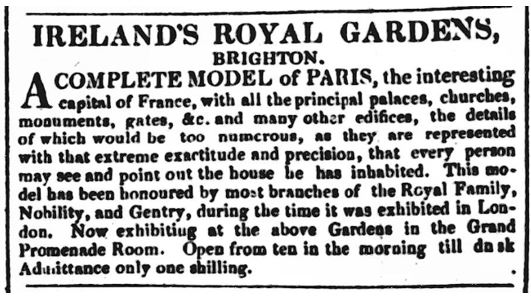 The newly opened Promenade Room or Saloon of Ireland’s Pleasure Gardens was described in 1824 as “a beautiful and effective addition to the general design [of the Gardens]” The Promenade Room is clear in the image below, as it stretches either side of the central Assembly Rooms.  The Pleasure Gardens were closed in the early 1830s and later replaced by Park Crescent, just north of The Level. 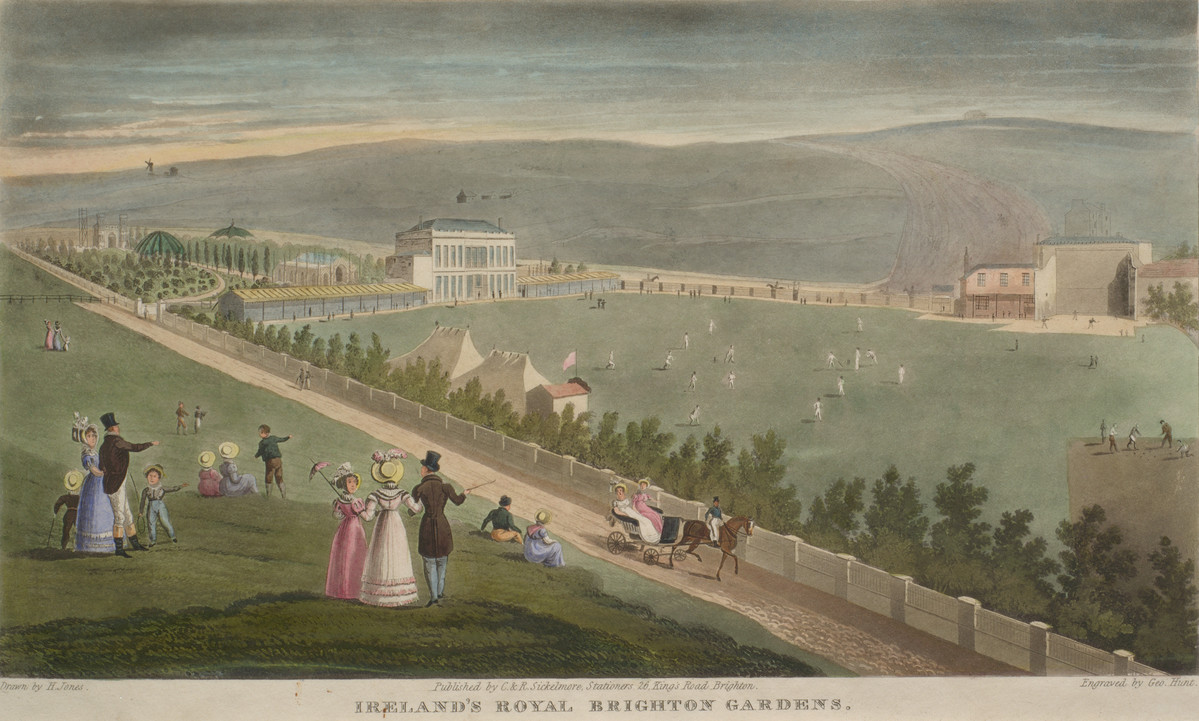 Another local newspaper report about the Paris model reads much like an 1825 TripAdvisor entry:

It is about twenty feet long by fifteen broad, covering a space as large as the floor of a pretty good room. The houses, bridges, monuments, &c. are all fac-similes of the objects, on a miniature scale and coloured after nature.  A person by examining this model, can form nearly as perfect an idea of the form of the city, the arrangement of the streets, the style of building, the appearance of the churches, monuments &c. as if he had lived in the city.  We found no difficulty in recognising our old lodgings, and some of the cafés where we had regaled ourselves of an evening.  The trees of the Boulevards, Champs Elysées, &c. have their tiny representatives; the Seine has its boats and its charcoal rafts, all correctly imitated.  In short, we strongly advise those who wish to see Paris, without the trouble of crossing the ocean, to take a look at the model. The representation of the Cemetery of Pere La Chaise is also highly deserving of a visit.

Brighton had the honour of being the first town, after London, to exhibit this French plan relief.  Did M. Choffin (or was it M. Chaffin? – the newspapers could not agree) and his three sons travel with the exhibition?  After all, they had reportedly spent 11 years perfecting the model. Whoever he was, the exhibitor charged a modest one shilling entrance.  At this price, shopkeepers and professional families could afford the entrance fee, even if their servants could not.

It would seem that the town model of Paris was popular in Brighton.  When, later in September 1825, the Promenade Room was needed for other functions (amongst which “a public dejeuné [sic] … under the patronage of the Duke of York, and other distinguished personages”) the exhibition moved to The Freemason’s Hall in Rock Gardens. This hall stood “at the bottom of Upper Rock Gardens” and its address was given as St James’s Street.  This has now been identified as 59-60 St James Street. In the photo below, the plaque at the top of the prominent building on the left indicates that it was first erected in 1815 and then rebuilt or remodelled in 1914.

Toward the end of November 1825, the exhibition left Brighton and travelled to Bath, Portsea, Salisbury, Worcester, Birmingham, back to London, then to Dublin (for six months), Chester, Manchester (1828), Leeds York, Hull, Sheffield, Nottingham, Durham, Newcastle and Edinburgh (1829) Belfast, Newry and back to Dublin by 1830. In June 1830 the model of Paris, along with the one replicating the Père Lachaise cemetery, arrived in Glasgow where the latter model was said to have inspired the design of the Glasgow Necropolis.

This fascination with models is still very much alive.  Nearly 200 years later, in 2021, we can visit Brighton Museum where a large model of the Chain Pier (Brighton’s first pier, opened in 1824) is a great attraction.

Opposite the scale model of the pier is an equally popular plan relief of the Brighton’s Steine Gardens and surrounding buildings as they would have been in 1804.

In its small glass case (above), the Brighton model townscape, at a more modest four feet by seven feet,  cannot hope to rival the dimensions of the 1820s Paris version which was on

The Paris model boasted: “the gilded domes of its palaces and public hospitals no bigger than the tops of our pepper casters … and the triumphal column of Austerlitz [colonne de Vendôme] rears itself up like a cribbage peg.”.

Alas, Brighton had no grand column.  The County Hospital had just opened – but well away from the fashionable Steine Gardens.  However, the domes of the Prince Regent’s Riding School (now The Dome Theatre) and the cupola of the Prince’s seaside home are quite clear in the model.  A few years later this large but unremarkable home was to be transformed by John Nash into the magnificent Royal Pavilion, fit for a king.

Chaffin’s model has been lost. It may never have returned to Paris as it must have suffered much wear and tear in its travels.  But a vast number of plans-reliefs still survive.  The tradition is a very old one: Louis XIV commissioned plans reliefs in the 16th century and there was a resurgence of the craft around the time of the Revolution of 1789. 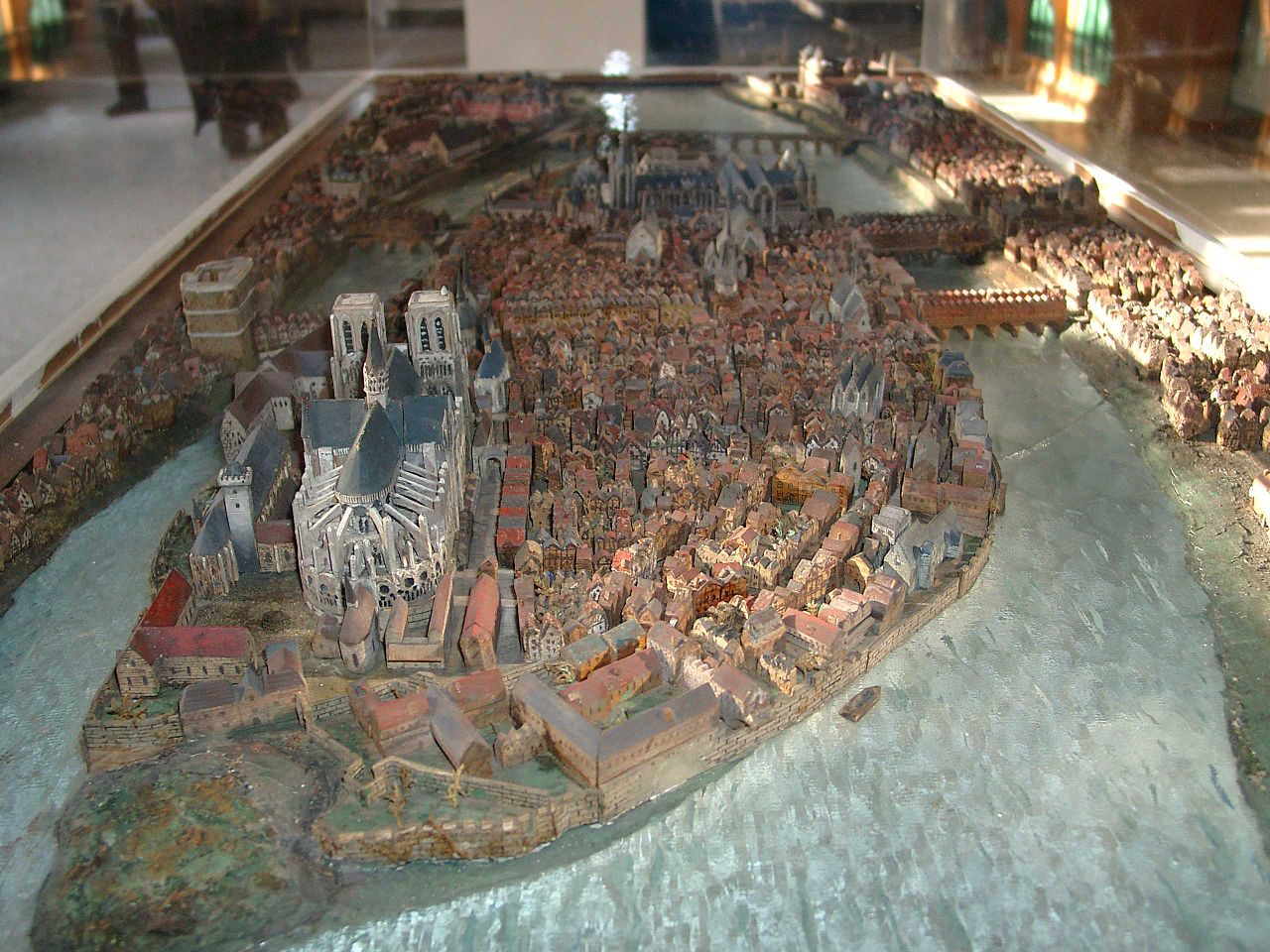 Model of the Ile-de-la-Cité, Paris. Courtesy of the Musée Carnavalet, Paris

The model of mediaeval Paris (above) at the Musée Carnavalet was made in 1900, the Brighton townscape was created in 1950 for the Regency Exhibition in the town and in the early 1970s, Joyce and Edward Harland built the Rye Town Model. However, it is in France that the best examples of this art / craft are still to be found.

One thought on “Paris comes to Brighton”