“Mrs. Fitzherbert, the Duchess de Noailles, and many other ladies of distinction, were present at the Cricket match, and dined in a marquee pitched on the ground, for that purpose. The Prince’s band of music attended, and played during the whole time the ladies were at dinner. In the evening, Mrs. Fitzherbert, the Duchess, Lady Clermont, and Miss Piggott, walked round the ground, seemingly the better to gratify the spectators with a sight of the French lady. The Duchess de Noailles appears to be 21, or 22 years of age, is very handsome, and her figure and deportment are remarkably interesting.”

That was on 7 September 1792. It sounds as if it was a fun afternoon. The Duchess de Noailles was in fact 18-year old Natalie Luce Léontine de Laborde and merely Countess de Noailles.  The “real” Duchess was a relatively distant cousin of her husband.    In 1790, aged barely 15, she had married 16-year old Charles de Noailles, she had had a daughter the following year, and had seen her husband leave France as an émigré even before the child was born.  And here she was in England, still a teenager, being amused by the Prince of Wales’ (unacknowledged) wife and the upper echelons of British aristocracy.

Indeed, just the previous week the Prince of Wales had put on a grand show for rich and poor alike on his Royal Cricket Ground (now under the houses and gardens of Park Crescent):

“Monday morning at six o’clock a large ox was put down to roast at the pit near the cricket ground, to which place were sent about 20 hogsheads of ale and about 2000 loaves of bread. – At half past three o’clock they drew Mrs. Fitzherbert in the phaeton, at which time their royal highnesses the Prince of Wales and the Duke of Clarence appeared on the ground.  The ox was cut up by Mr. Ruffell the butcher who was dressed on the occasion in white with mottled cap, and blue and buff ribband round his arms with a sash over his shoulders bearing the motto, ‘Long Live the Royal Brothers’.”

But was this show of magnanimity (of the “bread and circuses” kind) anything to do with what was happening across the English Channel?  The same newspaper reported on 3 September 1792:

“Cargoes of unhappy Frenchmen arrive daily at this port, who get away in the middle of the night in English vessels. Upward of 20 genteel people landed on Monday, and nearly as many on Sunday.  They are uniform in their deplorable description of their country.  History furnishes no instances of similar anarchy and distress, nor were such cruel barbarities every practiced in the most savage nations.”

The French monarchy had fallen on 10 August 1792.  The royal residence, the Tuileries, had been attacked and the Swiss guard had been unable to defend it: one third of them had perished in the attempt.  Louis XVI, Marie-Antoinette and their two children were taken as prisoners to the Temple. The stage in the French Revolution known as The Terror had just begun.

There had been executions prior to 3 September 1792, but a murderous campaign was unleashed by rumours of invasion and counter-revolution, paranoia and mass hysteria: all the inexplicable forms of madness which lead to such horrors.  In the circumstances, the guillotine might well have been a preferable, quicker, way to die.  Men, women and children of both high and low rank were killed in barbarous ways.  One notable example was the hacking to death on 3 September 1792 of Marie-Louise Thérèse, Princess de Lamballe, friend and confidante of Queen Marie-Antoinette.  The event is graphically and sensationally shown in the engraving below.  The decapitated body of the Princess is being dragged through the streets whilst her head is held aloft on a pike.  Such events explain the exodus from France. 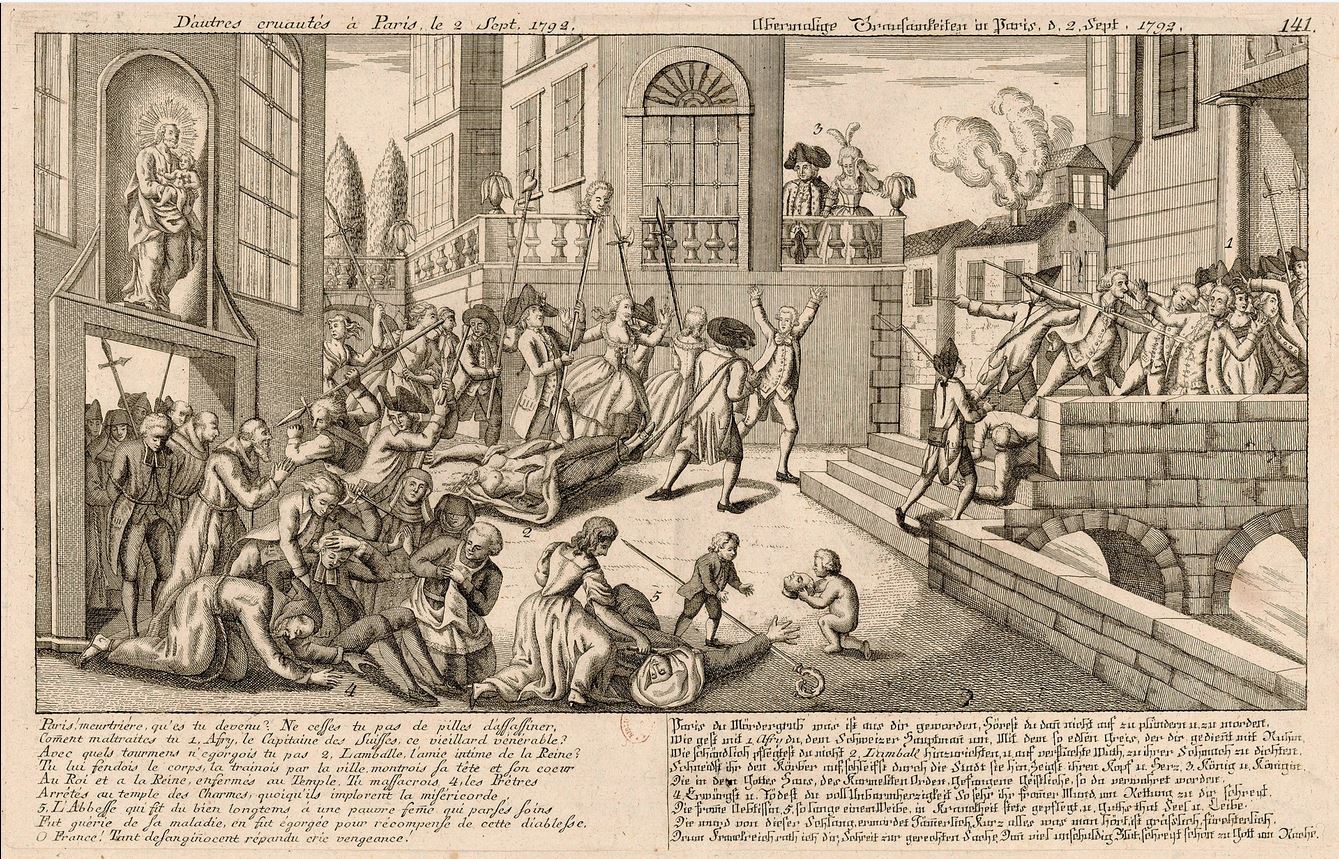 Nobody know how many priests, nuns, aristocrats and passers-by were massacred in that first short burst of violence in early September 1792. Numbers vary but “about 1,400” is often cited.

So, the young lady swanning around Brighton with Mrs FitzHerbert and the other “ladies of distinction” was not as carefree as might be assumed.  Like so many others with a string of titles to their name, she was fleeing for her life. Natalie had arrived in Brighton from Dieppe on 29th August.  It had not been an easy journey:  she had had to make her way secretly to Dieppe where she had lain low for a week accompanied only by her tiny daughter and a trusted nurse. The nurse, being “of the people” was easily able to board ship for England taking baby Léontine with her.  Imagine the feelings of the young countess as the child left her? Would she ever see the baby again? The newspapers continue the story:

“During the whole time, she [the Countess] was obliged to appear in male, and mean attire.  She once offered herself to a collier to work her passage as a sailor, but was refused; at length, however, urged by despair and disclosing her real situation to the Captain of one of the packets, he, with much humanity, contrived to bring her off, by concealing her under a coil of cable upon the deck (where she was, incredible as it may seem, obliged to lie for fourteen hours,) and was landed safe here yesterday, exhausted with the fatigue and terrors she had undergone.”

According to the Ipswich Journal, Natalie “was received with the most polite and cordial hospitality, by his Royal Highness the Prince of Wales, and Mrs. Fitzherbert. Her husband being a counter revolutionist, she found it very unsafe to remain any longer in Paris, or any other part of France”.

In the Willett Ceramic Collection of Brighton Museum, King Louis XVI and his wife Marie-Antoinette pretend to ignore the guillotine. The lady on the scaffold in front of them has already lost her head. (c) Royal Pavilion & Museums, Brighton & Hove

This was a very real danger: following her return to France she was imprisoned, her father, her husband’s grandfather and several other friends and relations were guillotined in the summer of 1794 and both the Laborde and the Noailles family estates were confiscated.

The reasons for Natalie’s flight to England, as given by the newspapers, is largely accurate.  However, Marie-Claude Jardin, in her excellent and detailed book L’enchanteresse de Chateaubriand, has uncovered the main reason for Natalie’s escapade:  her husband was in London with another woman.  The headstrong Natalie was attempting, unsuccessfully, a reconciliation with her unfaithful spouse.

What happened to Natalie after her return to France a few weeks later?  Estates and reputations were eventually restored and, in her early 30s, Natalie became the lover of author René de Chateaubriand … but you would have to read L’enchanteresse de Chateaubriand to find out all the sad circumstances of Natalie’s later life.

And for cricket lovers: the match played between Sussex and Middlesex seemed to have been hard-fought, played over just two innings, Middlesex scoring 119 runs to 121 for Sussex.  However, that was at close of play on the day. The rest of the match was postponed until the following year … and never resumed.