Imagine the grand sight of two thousand musicians and choristers in “a daylight procession [starting] from the Pavilion at six in the evening and having marched with music and banners along the Kings-road to Brunswick-terrace, will return by the same route to the Pavilion grounds.” (Daily Telegraph and Courier).

What the advert above does not highlight is that almost each one of these two thousand performers was a Frenchman (with a few French-speaking Swiss and Belgians in the mix for good measure).  Conference delegates descending on Brighton en masse is nothing new, for this event took place in 1881.

All these men (yes, the performers were all male) came to Brighton to take part in a Grand Festival of French Music.  This was a time when every small town in France would have its Orphéon [male-voice choir and band].  You may wonder why all these men should come to Brighton when such festivals were common in France.  A journalist of Le Figaro newspaper mused, perhaps a little sniffily:

[Getting 2000 people to cross the sea to be able to judge their musical skill is a fairly novel idea.  Why in Brighton rather than in Boulogne or Dieppe, I don’t know; the organiser, a Frenchman, I believe, must have thought that it is only in Brighton that choral societies would be truly appreciated.]

The journalist from Le Figaro had most likely answered his own question.  The event was organized by Frenchman Bernard Ernest Chérifel de la Grave.  M. de la Grave had been born in 1828 and, after his studies had worked as a language tutor in various parts of France until at least 1867. As an enterprising 35-year old he had gone into partnership with a firm which financed a school of which he was principal.  It was well-run and well-situated, in Saint-Mandé in the chic outskirts of Paris and, according to the local newspaper, students spoke highly of it. Disaster struck when the financing company became bankrupt.  After a court case against the financiers, Chérifel de la Grave was left with a mere 2,522 francs and 27 centimes.  Did he choose to use that money to move to England or did he find it expedient to leave France?  By 1869 he was settled in Brighton and was advertising his wares from 40 Hamilton Road: 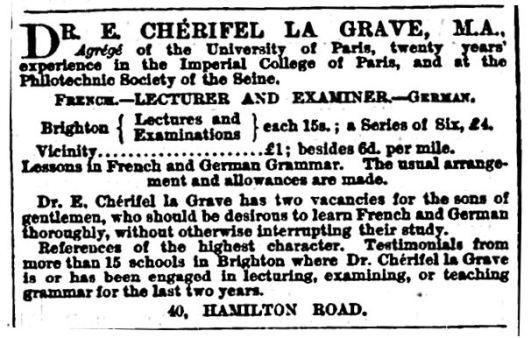 So in 1881, M. de la Grave was Secretary of the committee organising a Festival of French music: he invited the entrants; he found the accommodation for them; he rounded up the judges; he chose the venues; he dealt with the social media of the day, “puffing” the event in as many newspapers as he could.

So how did all those Frenchmen travel to Brighton.  By train and sea, of course. 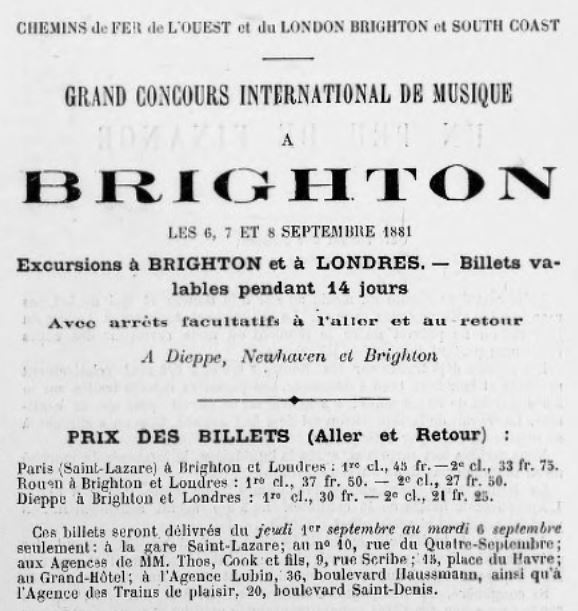 A first-class ticket from Paris to London would have set any Orphoniste back 45 francs, but most participants would have been happy with second class travel at 33 francs (approximately £130 pounds, or the cost of 450 litres of milk).

The event was a huge success.  It encompassed concerts and competitions.  Each Orphéon had to undergo various tests, including sight-reading an allegro millitaire by Victor Pons.  Victory was important.  There were cash prizes for the best choirs and bands, but what were much more sought-after were the silver-gilt wreathes and medals which could be pinned to the victorious contingent’s banner as well, perhaps also the objets d’art, bronzes, statuettes, coupes d’argent et de vermeil … offerts par les habitants de Brighton [art pieces, bronzes, statuettes, silver and silver gilt cups … donated by the people of Brighton].

A great part of the success of the Festival does seem to have been due to the excellent organisation by Chérifel de la Grave.  He filled relatively small halls with the competitive events: the Aquarium; the Banquetting Room and the Music Room at the Royal Pavilion; the Upper Rooms of the Town Hall and.

How many ticket holders or subscribers attended the smaller events is not known, but there is no doubt that “the Dome Assembly Rooms” had a capacity audience of 3000 for the concert on the first evening.  Alas, chief judge Charles Gounod did not put in an appearance, although Camille Saint-Saëns, having missed the opening ceremony, did indeed, it would seem, play the magnifcent Willis organ in the hall.

The last concert of the Festival forms a sad epilogue to the story.

Bright and early on the morning of  5 September 1881, the day preceding the start of the festival, fifty-eight members of the Orphéon of the village of La Ferté-Allais (population 884) and its surrounding district boarded the slow train on their way north to Paris and from there to Brighton.They were accompanied by the Mayor of the communune, M. Millard, by their banners and by their instruments.  Their train halted at Charenton station, on the outskirts of Paris.  At exactly 9.42 am, the express train from Marseille ploughed into the rear of their stationary 2nd and 3rd class carriages.  Within minutes, 17 people had died. Five more were to die of their injuries. Amongst the dead: nine musicians from La Ferté-Alais.

Reporters from La Petite Presse  and other national newpapers at the time point out two touching details.  The first is in the makeshift mortuary in the station itself:

[On several of the mangled garments a red ribbon topped with a little gilded lyre could still be seen; the badge of the La Ferté-Alais band]

[…where a heap of flattened and mishapen musical instuments is piled up; cornets, tubas, trombones etc …; these are the instruments of the ill-fated bandsmen from La Ferté-Alais who for the most part were travelling in the rear carriages.  They were on their way to England to take part in music competition in Brighton.  This band, which had fifty-eight members on board, has been the most severly affected and has suffered the most losses.  Nine of them have been killed and about twenty injured.  What a bereavement for the little village.]

The people of Brighton took this accident to their hearts. The Mayor of Brighton, immediately on hearing the news, opened a subscription for the  benefit of the victimes and their families.  Then, at an additional concert arranged for the last night, Thursday, more money was raised.  The appeal and the concert raised in the region of £45.00 each.  Not much?  Well in 2020, the equivalent total would be in excess of £6,000.00 for “foreigners” Brightonians had never even met. There’s Brighton compassion for you.

And a last word on Chérifel de la Grave:  The year after his success in Brighton, M. de la Grave became secretary of a similar event in the Albert Hall in London.  It was a disaster.  No single competition or concert could fill the massive spaces of the august building.  This account of the 1882 débâcle seems to emphasise even more clearly the warm welcome given by Brighton:

Bernard Ernest Chérifel de la Grave had moved to Hammersmith by 1888 where he resumed peripatetic tutoring until he took up a post as language teacher at the privately-run Willesden High School in North London in 1890.  He died in 1893 at the age of 65.