On Friday 23 August 1816, Captain Cheeseman, master of the Neptune packet boat, returned to Brighton.  He brough disturbing news for all his fellow mariners, for their passengers and for trade with France.  During the night of 19-20 August, Captain Thomas Partridge of the Nancy had been shot by French customs officers just outside the port of Dieppe. 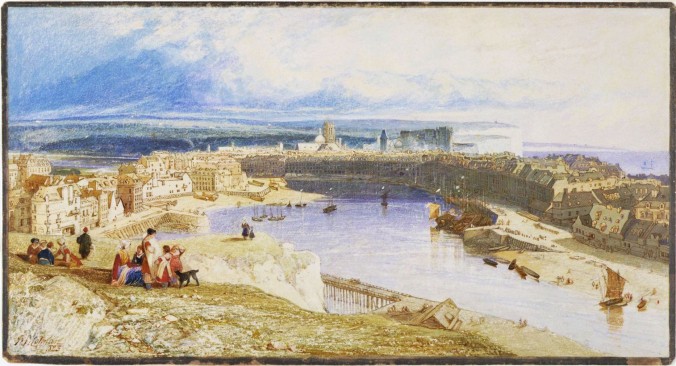 Capt. Partridge was not a smuggler.  He was on his way from the Isle of Wight to Ostend carrying no more than ballast.  Just 13 months after the Battle of Waterloo, Anglo-French relations were not all they could have been.  The very article which reports Capt. Partridge’s murder also states that:

So what happened on that August night?

Capt. Cheeseman had returned to Brighton from Dieppe on 22 August.  He reported that the Nancy had been minding her own business off Dieppe when she was approached by a boatload of customs officers at about four in the morning.  The officers later claimed that they had suspected the Nancy of carrying contraband goods.  The customs men, sailing inexplicably in a hired fishing boat, had ordered the vessel to “bring to” (to stop).  Capt. Partridge was slow to respond.  A volley of small-arms fire was directed at the Nancy but did no more than put a few holes in her sails and send the crew (except Capt. Partridge) scurrying below decks.

What happened next was more dramatic.

Captain Partridge was laid to rest in the Protestant cemetery of Dieppe within hours of his death.  This was, according to Henry Johnson then Vice-Consul in Dieppe, “in consequence of the heat of the weather, the state of the corpse was such as to render immediate interment necessary.”

This was particularly harsh as two of Capt. Partridge’s adult sons were among the crew of the ship.

Alas, the French authorities seemed to take the crime rather lightly.  Fourteen customs officers were tried for the crime.  Whilst waiting for the trial it was reported – by English witnesses, admittedly – “that the prisoners are seen every day going out and returning to prison on their parole and the unfortunate affair is treated with the utmost levity.”  Two officers were convicted.  Their punishment: “two month’s imprisonment, and to pay a fine of three thousand francs each.”

By the beginning of September 1816, France in general and Dieppe in particular had temporarily ceased to attract English tourists.  This was going to be a problem for the sea captains, the Brighton landladies and the London to Brighton coach companies, all of whom needed a constant flow of cross-Channel passengers in both directions:

This situation did not last long.  Although traffic toward Dieppe had dwindled, the Prince of Wales was regularly visiting Brighton, the racecourse was in operation after a short closure following a dispute with the owner of the land and the returning English folk were ready to enjoy themselves.  All would be soon well again in Brighton’s world. (See also blog of 6 October 2019)