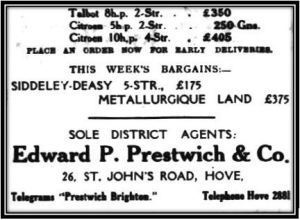 It is possible that Edward P. Prestwich was the first garage owner to sell Citroën cars in Brighton in 1921.  The fascination with Citroën cars continues today as Francophile deuchiste (2CV enthusiast) John Loveridge of Rottingdean recounts:

“There has always, of course, been an interest in Sussex for Citroën cars; indeed, the first Citroën dealer in the UK at present is Worthing Motors in Broadwater; this dealership was established in 1923.

“André Citroën himself stayed in Brighton in 1934 when he visited Sir Harry Ricardo at the Ricardo engine research and development facility in Shoreham-by-Sea; Ricardo was then designing the engine for the first diesel-engined car in the world – the diesel version of the Citroën Rosalie which was marketed in 1935.  André Citroën even ate at the Ricardo canteen during his visit.

“My particular interest with Citroën cars started in 1966 when I had a 1950 Citroën 11 Légère (known as the Light 15 in the UK).  This was followed in 1969 by my first Citroën deux chevaux – a 1961 LHD model that had been imported from Belgium; at this time 2CVs were not available through UK Citroën dealers; I later sold this car to someone who took it to Mauritius.

“On my return from six years overseas in late 1975 I immediately bought a new 2CVfrom Rottingdean Motors then the official Citroën dealer in Brighton (now Lloyds Pharmacy in West Street); this was followed by another new one in 1979 – both these cars proved to be good family transport taking us to the Côte d’Azur, or sometimes the Atlantic coast of France, every year.

“In 1983 I also bought a 1977 LHD Citroën 2CV Dyane which sported French registration plates, so I had to re-register it.  Hence, for a while, I had three deux chevaux at the same time, the 1979 model, the 1977 Dyane and a third one that I used for spare parts.  In 1985 I bought a 1983 Citroën Visa; although not a deux chevaux, the engine of this car was based on that of the 2CV.  My next Citroën, acquired in 1988, was decidedly up-market: a new Citroën BX DTR Turbo, but I hasten to add that this was a company car.

“I took possession of my next deux chevaux in 1994 – it was a LHD 1985 model in Ferrari red; I later sold this to an American living in Maryland where it became one of the few 2CV in the USA.  Wanting to try the jeep version of the 2CV, in 1999 I bought a LHD 1969 2CV Méhari; in fact I bought this car in Chablis, Burgundy, France, where I had it restored, as there are very few in the UK.

“Most people go to Chablis to buy wine but I went there to buy a car!  Needing a larger car, in 2003 I bought a new Citroën Berlingo which proved to be an excellent work-horse for ten years.”