A southern French game similar to bowls but played, usually on a sand or gravel surface, with metal balls which are thrown toward the jack. (Oxford English Dictionary 2017)  Pronunciation:  Brit. /ˌpeɪˈtɒŋk/

Ray Ager was instrumental in bringing pétanque to Brighton. This is Ray’s own account of how that happened:

“I don’t remember precisely how it came about but we starting to stock pétanque boules in A Lot of Gaul (see blog of January 2017). It was possibly because, like so many visitors to France, I’d often seen the game played, was fascinated by it, even though I’d never actually played. When the first sets arrived, I said to myself, “I ought to at least learn the rules and have a go at playing it, so that I can answer any questions customers might have.” 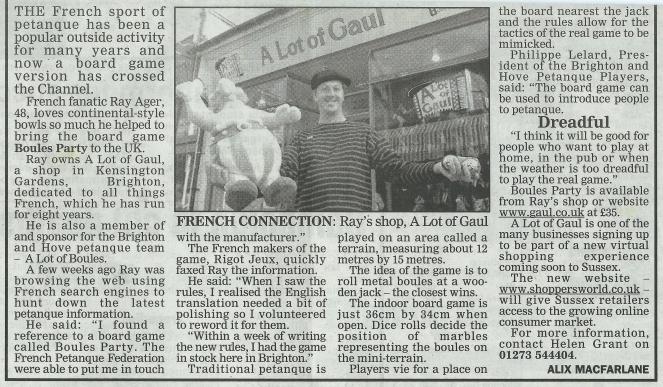 “One summer evening after work, I took a set of boules to The Level, which was on my way home – it was the only place I knew of with a gravel surface, at the time. It was an all-weather football pitch. I was on my own and started just throwing a few boules – I’d read the rules but didn’t really know what I was doing. Within five minutes, another player arrived with a set of boules: “I bought these in France five years ago but never played – I don’t know anybody else who plays. I live just across the road – my wife’s just come in from walking the dog and excitedly told me, ‘there’s somebody playing pétanque on The Level – why don’t you go over and talk to them’. Fancy a game?”

“We agreed to play again on Sunday morning. I put a poster up in the shop and to my surprise, about a dozen players turned-up for the first session. We decided to meet on a regular basis and after a short time, felt it was time to form a club, The Brighton and Hove Pétanque Club. It was originally called A Lot of Boules, reflecting the association with the shop but this name was dropped (perhaps for obvious reasons! ) in favour of the more official sounding Brighton and Hove Pétanque Club.

“As the club grew, we approached the Council, asking if there was any possibility of having our own dedicated terrain. We were lucky in our timing: it was the early stages of the seafront improvement programme when there was still the old disused boating-pool next to the West Pier, which for many years had been an eyesore, resulting in many complaints. The Council had no other plans but to our delight said, ‘’We could fill it in with rubble from the seafront and create a pétanque terrain.’’

“We were very lucky in having one of the largest terrains in the country, in an unrivalled seafront location, perfect for promoting the game. Pétanque became more and more popular, with the club hosting National competitions and a club twinning was established with a club on the outskirts of Rouen, leading to an annual exchange match. 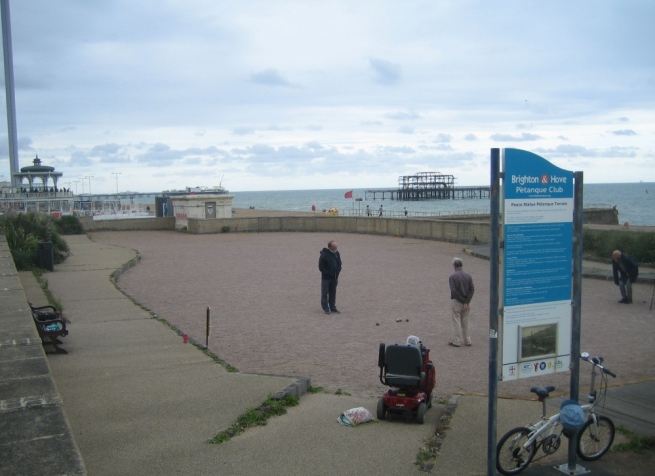 “With plans for redeveloping the West Pier, the terrain was relocated next to the Peace Statue, where it has become an established attraction, a perfect complement to the town’s Mediterranean feel and image.

“Petanque became quite an obsession with me. I’m still playing, now in La Ciotat, le berceau de la pétanque (the cradle of Pétanque) on the very terrain where the game started in 1907.”

*Note: despite the assertion of the Larousse Dictionary in 1948, Ray reminds us that modern petanque does, indeed, have a set rules for those who play in competition. However, it’s still a fun game if that’s the way you want to play it on any scrap of rough terrain.