The buildings within Brighton (Cayeux-sur-mer, France) included several hotels as well as many homes and second residences.  In 1901 the first purpose-built colonie de vacances [children’s holiday camp] in Brighton appeared.

The concept of giving children, in supervised groups, fresh air and additional education had started only a couple of decades previously in the 1870s in Switzerland.  It was adopted in France first by the non-religious education authorities and soon after by the Catholic Church for children from the industrial districts of Paris and other towns.  These children were known to suffer from tuberculosis, rickets and all the other ailments associated with polluted air and poverty.  In a colonie de vacances they could spend up to three weeks breathing fresh air, putting on weight, learning new skills and socialising.

The first colonie in Brighton was known variously as la Fondation Groult and la Colonie Vitry.  By 1901, Vitry-sur-Seine was a developing industrial community, just to the south-east of Paris.  Its main industrialist was the fabulously wealthy seed miller, Camille Groult.  However, the colonie de vacances was purportedly opened in memory of an Albert Groult by his widow.  At present, no connection between Camille Groult and Albert Groult can be found. 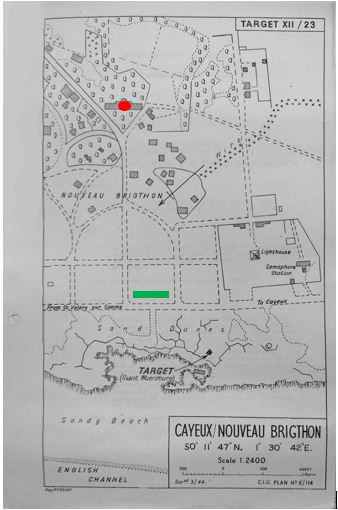 The Fondation Groult was well placed.  Not on the beach front, as land values by then were too high, but within 5 minutes walking distance (red dot on map).  Being a little inland, the colonie could benefit from green playing space around it and maybe even a little potager [vegetable garden] where children could learn about food and tending crops.

At some time before WW1, little Georges Petit was glad to show that he could write – but like the soldiers who compiled the reconnaissance map above, he simply could not get his pen round the difficult spelling of ‘Brighton’: 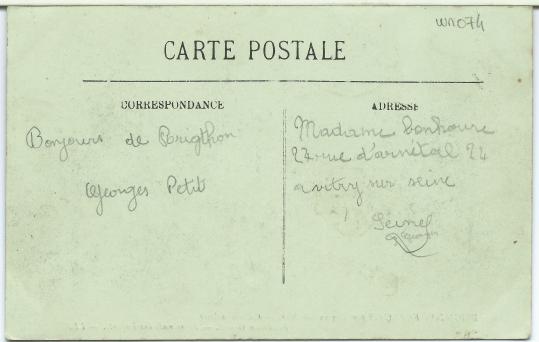 What did the great and the good in the smart hotels think of these possibly scrofulous children from Vitry?  Possibly they thought of them with indulgence in their smart uniform smocks walking along in well-behaved files, girls on the left, boys well apart on the right. 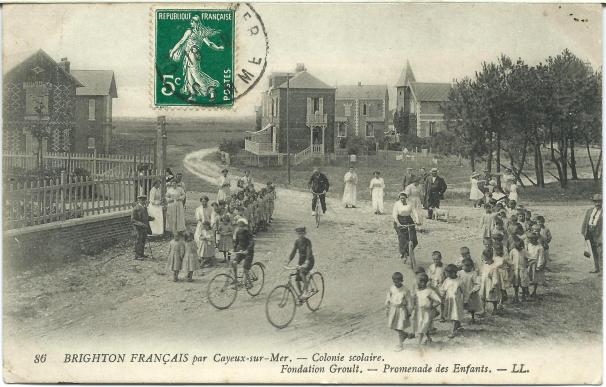 Over the years, as the sand blew in, other resorts became more fashionable than Brighton.  As the hotels closed and moved out, more colonies were able to move in.

The once proud Grand Palace Hotel was sold off and in 1923 it too was converted for the use of children.  The crocodile of children in the 1930s photo below seems to be wending its way back to the once magnificent pile (in green on map above).

Other hotels also changed their function.  The Hôtel Ermitage on the north side of Brighton became the colonie for the town of Lille.  At some point after 1925, the somewhat grander Hôtel Bellevue followed suffered the same fate.  By the time the postcard below was created, it would appear that only the caretaker was left to potter round the empty, fenced-off property.  Like the Grand Palace Hotel, the building now no longer exists, a casualty of the German retreat in 1944.

The colonies de vacances movement is still going strong.  If EDF supplies your electricity in Brighton (Sussex) the following news item from Le Courrier Picard newspaper on November 2016 may be of interest:

[Following the dismantling of the Jungle in Calais, 2,000 unaccompanied minors were taken in to reception centres.  50 of them, mainly Afghans, arrived in Cayeux-sur-mer (Somme region) on Thursday at about 2pm.  They are being housed in the colonie de vacances belonging to the social action committee of EDF-GDF in Brighton, opposite the dunes.]