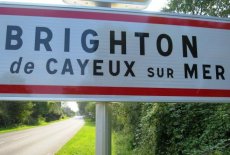 Brighton-lès-Pins [Brighton near the pines]; Brighton Plage; Cayeux-sur-mer-Brighton – call it what you will, there is a development called Brighton in the north-west of France.

Where in the north-west of France?  Find St Valéry at the mouth of the River Somme.  Follow the coastline round to the south and there it is, just two kilometres north of Cayeux-sur-mer.

In the very early 1880s, Daniel Rowlinson Ratcliff (Birmingham safe manufacturer), John William Willis-Bund (barrister), E. Johnson (International Exhibitions Agent), H Paddison and the Count Alfred de la Chapelle (adventurer and gold miner) all had one thing in common.  They were speculators.  They formed a syndicate.  And what better to speculate on in the France of the Third Republic with its new leisured bourgeoise?  Why not a holiday resort?

The syndicate bought 170 hectares of cheap, windswept land.  Their advertising prospectus listed the principal attractions to tourists, and hence investors, of the new development:

[ This delightful beach offers huntsmen and fishermen endless delights.  They can wage war on all the migrating birds.]

None of the above makes of think that the areas resembled in the slightest Brighton in ‘dear old Sussex by the sea’ but LE NOUVEAU BRIGHTON it had to be.

[CAYEUX, 19 July (1885) Yesterday the opening of the Grand Hotel des Sapins on the beach at Nouveau Brighton took place.  The hotel is felicitously placed on the edge of large pine woods which will make Brighton the Arcachon of the North.  In a few months, the railway from Noyelles to Cayeux via (St) Valéry-sur-Somme, will serve this new station, placed midway between Paris and London.  The train from Paris will belong the to the Northern Rail Company, the most comfortable and the fastest of all French rail services.]

The publicity brochure does not mention that, at the south-west corner of the development, there was a lighthouse.  A good landmark, something to fascinate the men and the boys and a good vantage point for photographing the area.  The undated photograph below shows the Grand Palace Hotel (formerly the Grand Hotel des Sapins), some of the new villas and in the far distance, the lighthouse of Hourdel at the mouth of the River Somme.

Was the development as easily accessible from Paris as was claimed?  Despite the railway station of Cayeux clearly displaying the name BRIGHTON in the photo below, in fact this station is in the centre of Cayeux town, some two or more kilometres away from the development.  When, in 1890, the syndicate applied to run a light railway from Cayeux station to Brighton, this was refused.  There seems to be no evidence of a dedicated railway halt at Brighton. 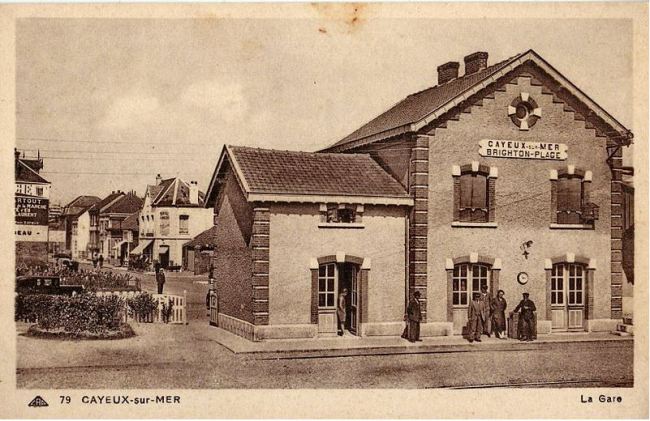 The last major building to be erected in Brighton seems to have been the Fondation Groult in 1901 (see separate blog).  Despite investors still being willing to put their money into the scheme, within a few years of the turn of the century, things started to go awry.

The sand and gravel coastline of northern France is constantly moving.  In Sussex, groynes have been used over the last 200 years to stabilise the shingle beach.  This was not done at Cayeux.  By 1910, shingle had moved north-east along the coast toward the mouth of the Somme, gradually widening the distance between the sea and, for example, the Grand Palace Hotel and the lighthouse.  This is hardly surprising as the name ‘Cayeux’ is derived from cailleux –  a pebble.  Nature took one final revenge in 1917 when a storm threw vast quantities of sand onshore.  The Grand Palais became derelict with sand reaching its first-floor windows.

The image below, looking north from the top of the lighthouse, shows in the incursions of the sands.

Could this amount of dereliction be due to wind, sand and stones alone?  As early as February 1915, the casualties of war were being moved to hospitals in Abbeville (30 km to he east) and elsewhere in the area.  Many of those British soldiers who survived the initial treatment of their wounds were sent to convalescent hospitals in the centre of Cayeux (the Casino and the Kursall) and in Brighton-lès pins.  The Grand Palace Hotel (Hôpital de Convalesence No 71) had beds for 110 men.  The Fondation Groult, ‘annex’  to the Palace Hotel, could take up to 90 convalescents.

It was these hospitals which first made many British people first aware of the name of Cayeux-sur-mer.  The  ‘The Scandal of Cayeux’ was in all the newpapers.  In March 1918 Millicent Garret Fawcett could not but vent her spleen about it in a letter to the press.  The headline is:  MAISON TOLÉRÉE.  Mrs Fawcett starts as follows:

“Sir,  A maison tolérée has been opened at Cayeux-sur-mer, in France, where the women are registered and inspected, and this maison tolérée is visited by British soldiers from a large convalescent camp in the vicinity…

… I say nothing for the moment of the degrading sex slavery which this implies, though, of course, I feel this deeply, even passionately.”

She continues by arguing that despite the ‘inspection’ of the women, venereal disease is bound to be rife.  By 15 March, even the 6th annual meeting of the Todmorden Evangelical Free church council is referring to ‘the unspeakable scandal of the Cayeux brothel’ as reported in the Todmorden & District News.  Doting mothers began to write to the newspapers claiming to accept into their homes their sons’ bodies , broken by the rigors of battle, but that they could not accept the shame of a son who returned defiled in this way.

Between the two world wars, Bighton-les-pins limped on as a holiday resort.  The sea receded.  The sand continued to blow in.  In 1923 the Grand Palace Hotel became a colonie de vacances, a holiday camp for children of the Somme département [county].  The tone of the place was in sharp decline.

On 22 June 1940, Hitler forced the French to sign an armistice in a railway carriage in the forest of Compiegne.  Vast swathes of France became occupied territory.  German troops dug in along the coast, and especially at Brighton.  Once again, the area was a hive of building industry.  But this time it was for the creation of a critical part of the German’s Atlantic wall.  Blockhouses, gun emplacements and all the paraphernalia of defensive and offensive warfare were installed.  Ironically, these massive constructions have survived less well than than many of their more elegant and fragile domestic predecessors.

A British aerial reconnaissance photo of the Atlantic Wall installations shows the Palace Hotel and light house still standing but almost a kilometre from the sea.   (As these reconnaissance photos were most likely taken by American pilots – it’s not so surprising that ‘Brighton’ is spelt incorrectly.)

Following the D-Day landings and the allied push from the channel coast in June 1944, the Germans retreated.  They destroyed in their wake and in their revenge, the Palace Hotel, the lighthouse and many other buildings.

Brighton might well have returned to the blasted heath it had once been.  But populations grow.  Since 1982 the basic working week has been just 35 hours. These and other factors have meant that Cayeux could resume its original role as a station balnéaire [seaside resort] as Belgians, Brits and even Parisians and other large cities dwellers want a gîte or weekend cottage.  And in addition, there is now a another role.   New roads allow commuters to work in Abbeville, Arras and Amiens.

So once again, the developers have moved in, as they did in 1882.  Visitors to Brighton in 2018 will probably not see this board (below).  It stands at the southern-most corner of Brighton where a number of rather anonymous little pavillons [small houses] are emerging.  But perhaps in 140 year’s time, if they still stand, they will be considered as quaint little early-21st century delights.

Nothing marks the site of the Palace Hotel.  But a view from the new (1953) lighthouse still shows the layout of the original Brighton. Some of the original villas do survive and are being lovingly preserved.  For those with imagination, the elegant, the refined Brighton-lès-Pins lives on.