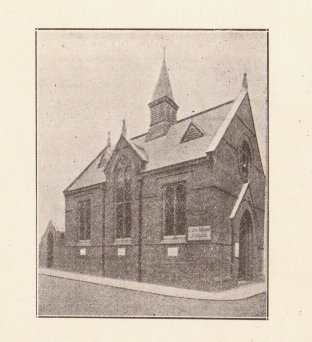 1860.  The Prince Consort was alive and well.  Crinolines were all the fashion.  Brighton was attracting many continental visitors.  Not only the rich. Governesses, hotel staff and servants helped fill the pews in Brighton churches.  And frivolity was not all the rage in mid-Victorian Brighton.  A certain Mrs E Hayes saw that these overseas visitors (as we would call them today), and indeed the considerable numbers of French residents in the town needed a place to worship in their own language and in their own way.  Mrs Hayes generously opened her own house (20 Montpelier Villas) for such services.  Soon the same lady was instrumental in ensuring that a French speaking Pasteur was sent from France to minister to the French flock.  The Rev. A Gonin arrived in late 1860.

As the congregation swelled, services were held in various buildings:  the Presbyterian Church in Queens Road (demolished c1978); St Margaret’s Church Hall (demolished c1958); the Congregational Church in Union Street (now the Font and Firkin public house) and “Little Vic” in Cannon Place (demolished c1958).  After so many moves, Mrs Hayes must already have had in mind the possibility of a building dedicated to the French Protestant community.  The final straw came in 1885 when the rent on the “Little Vic” was raised steeply from £50.00 to £75.00 – a staggering 50% increase.  Something had to be done.

In 1887, for the sum of £735.00, a piece of ground just off Regency Square was purchased with the help of the Protestant Churches of France.  This piece of land lay behind a row of houses which stretched 121 Kings Road to the corner of Regency Square.

Once the land had been acquired, how was the church itself to be built?  £800.00 was needed to erect the building.  It was, of course, Mrs Hayes, encouraged and supported by her brother, Mr Joseph Lawrence, the Huguenot Churches of Holland and local supporters of the French Protestant Church, who raised the sum.  By July 1887 the fabric of the Church had been constructed up the level where you can now see the three white engraved stones in the west wall.  It was time for the ceremony to mark the foundation of the Church.  A temporary floor was put in, a harmonium installed and an awning was suspended overhead from the scaffolding to protect the guests from the hot rays of the sun.  Beyond this structure was a platform running along the western side of the building where the three foundation stones were hanging, ready for fixing.  Mrs Hayes must have been distressed that on 18 July 1887, the day of the ceremony, she was too ill or frail, at the age of 86, leave her house.

Or there again, would Mrs Hayes have enjoyed the ceremony?  How would this indomitable fund raiser have reacted to the homily given by the Rev.J.G.Gregory.  Most of the newspapers which report the ceremony merely state that the Rev. Gregory spoke about fund raising.  Only the “Brighton Argus” gave the full story.  Tactfully at first the “Brighton Argus” reporter says “we are of the opinion the rev. gentleman’s vigorous zeal outshone his discretion”.  What did the reporter mean by this?  Quite simply that the “rev. gentleman” referred to fundraising as “stiffing the Lord’s fire with the devil’s poker.” He (the rev. gentleman) said he “did not know what bazaars, balls and concerts meant in connection with the Lord’s work.” and went on to castigate fundraisers in general.   Was the reporter of the “Brighton Argus” perhaps thinking of Mrs Hayes when he says that the Rev. Gregory’s “remarks will give pain to many who delight in helping a good cause.”  Perhaps it was just as well that Mrs Hayes was not present on that auspicious day.

How must the Rev Gregory have reacted to the fact that the collection made during the service produced the sum of £27/2s/6d?

The concept of the time capsule was as popular in the nineteenth century as is today.  Concealed in the central foundation stone of the French Church are “a local paper, a bronze jubilee medal (Queen Victoria was celebrating the Golden Jubilee of her accession to the throne in 1837) and a number of Jubilee coins.  To lay this stone, the Mayor of Brighton had been presented with a silver trowel with ivory handle.

The laying of the foundation stone was the manifestation of the temporal side of the life of the Church.  Let us hope that Mrs Hayes was able to attend the much more significant event on 27 February 1888 when the French Church was finally consecrated for use for services, marriages, funerals and christenings.

For 120 years, the Church celebrated weddings and christening. A Sunday service was held every week.  In 2002, Pastor Orna-Ornstein generously allowed the Regency Square Area Society to host a Golden Jubilee lunch for the members of the 30 strong Dieppe town band who had come to played at the Society’s Jubilee event. 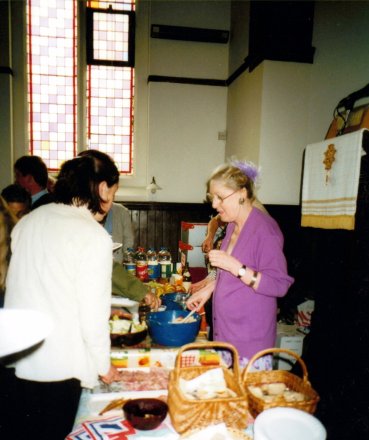 But the congregation was dwindling.  By 2008, the committee of the church finally decided to sell the building.  It was finally deconsecrated.

To the distress of many local people, the first purchasers of the property in 2008 stripped much of the Victorian interior.  Things were looking bad for the little gem.  Then in stepped two sensitive developers.  They turned the interior of the church into a delightful split level home – there cannot be many homes that have their stereo system tucked into the pulpit or their bedroom perched over an ornate porch entrance –  but more importantly, they went to the trouble to attempt to turn back the clock:  they tracked down some of the missing fixtures and fittings and, more for the benefit of passers-by than themselves, they had the three foundation stones (mentioned above), turned and re-engraved with the original information.
Pulpit of the French Protestant Church (about 2002) (c) Suzanne Hinton
The interior of the church may be far from what Mrs Hayes had intended, but the area is lucky to have two residents whose investment has secured the continued existence of a building that Mrs Hayes would easily recognise. 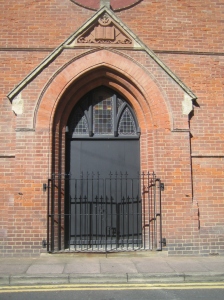 Update 2016:  The church has seen more alterations.  Recently (2016), the crypt has been dug out and converted into a bedroom with an en-suite bathroom.  This strangely shaped bathroom echoes exactly the shape of the apse above.   The toilet sits immediately below the site of the former altar.  The original main south doors as well as the entrance to the vestry on the west wall have recently been removed and replaced with featureless modern ones.

One thought on “The French Protestant Church of Brighton.”